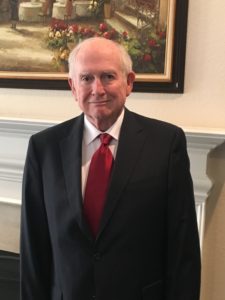 After I retired in 2013, I quickly realized that I needed to have something to do that was both worthwhile and challenging, or at least interesting.  I usually say, however, that the realization was that my dogs had gotten tired of being walked; there is some truth in that too.

2. What types of cases have you accepted?

Almost all of my cases involve aspects of family law along with a bit of probate and will drafting.  I also have been an attorney ad litem, defended a debt collection/repossession claim, and asserted one client’s consumer claim in a seller’s bankruptcy proceeding. I have accepted a total of thirty-three cases in Dallas, Collin, Rockwall, Grayson, and Hunt counties.

That probably would be a Dallas County divorce case in which, several years ago, I represented the wife as petitioner.  She and respondent both were decent people and both were very concerned for their child’s welfare.  Eventually they reconciled and the petitioner had me nonsuit the case.  So far as I know they are still together.

The honest answer is that it is a mixture of faith-motivated altruism and self-interest.   I cannot say which of the motives is the more important.

5. What impact has pro bono service had on your career?

Because I am retired from the compensated practice of law, these pro bono cases are my career (or I don’t have one).

6. What is the most unexpected benefit you have received from doing pro bono?

I am enjoying this work more than I ever did the compensated practice of law.