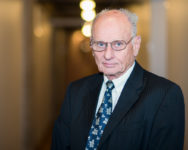 Volunteer of the Month – March 2017 Firm: Manning & Meyers, Attorneys at Law Jack Manning is the Founder and Senior Shareholder of Manning & Meyers. Jack began working with DVAP in 2014, and has been an avid volunteer ever since. Manning & Meyers won the 2015 Gold Award for Pro Bono Service for Dallas Offices under 50 Attorneys, and the firm participates in as many pro bono opportunities as possible. Jack won the … END_OF_DOCUMENT_TOKEN_TO_BE_REPLACED