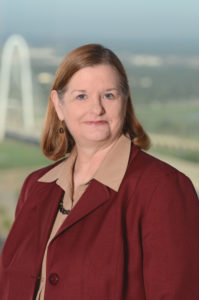 Julia Pendery is Of Counsel with Cowles & Thompson.

When I rejoined Cowles & Thompson in 2016, they regularly forwarded the DVAP list of available pro bono cases. I was interested, but my areas of expertise are civil appeals and eminent domain, so those were not likely to be needed by DVAP.  I thought I could pick something fairly simple and learn it from the DVAP attorneys, which I have.

I helped a man in his fifties who had been living on $800 a month Social Security disability due to a head injury he sustained in high school. When we first met, he put my hand on his skull to feel the large crack in it.  I soon realized he had significant mental dysfunction and had been taken advantage of. A woman had married him and opened a joint account, into which she had his monthly benefits deposited.  Then she left him and arranged to have his benefit check deposited into a new account, which was controlled solely by her. She had also gotten credit cards in his name and maxed them out, and took his car. He was subsisting by giving blood, finding a few odd jobs, and staying with friends or on the street. She fought the divorce at first, but realized it was in her best interest to sign the papers. Along with his divorce, he got his benefits (and a bit of his dignity) back.

It truly is “billable hours for the soul.” Every time I help someone get divorced, they get to start a whole new chapter of their life. They are always so grateful, and I rejoice in it with them. Many have been separated for years but could not afford to get a divorce, or the spouse had gone to jail, moved out of state, etc. Until they went to a DVAP clinic, they had thought they could never get out of the marriage and had put their lives on hold.

4. What impact has pro bono service had on your career?

It’s given me a perspective on what a problem really is and helps me remember that I became a lawyer to help people solve problems.

5. What is the most unexpected benefit you have received from doing pro bono?

Pure joy when I get a hug from a person who has been freed to start fresh.